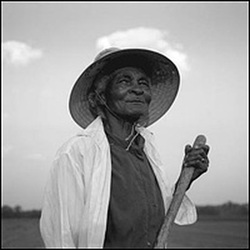 Rosa Williams Murphy (1913 - 2014) celebrated her 100th birthday in 2013! She has been instrumental in local and national advocacy and protest actions for the rights of black farmers.  Her efforts have been documented and lauded for aiding in justice on behalf of many hard-working families. Mother Rosa was actively involved in the case, Pigford v. Glickman, a class-action lawsuit that charged the U.S. Department of Agriculture (USDA) with widespread discrimination against black farmers.

http://www.themilitant.com/2000/6432/643254.html
Black Farmers:  We Want our Land Back (2000)
The demonstrators gave a standing ovation to 86-year-old Rosa Murphy, a Georgia farmer who "came this far for the fight." Her claim was turned down because the authorities said she didn't have the farm, which she has had since 1938.

http://coax.net/people/lwf/BFAA_V10.HTM
On Sunday morning, July 30, Unity 2000 invited Black Farmers & Agriculturalists Association (BFAA) to lead the march and hold the UNITY 2000 banner through the streets of downtown Philadelphia
In attendance in that court room was an 86 year old Black woman farmer, Mrs. Rosa Murphy, who had bought a farm in Georgia in 1938.  She was denied the $50,000 settlement because the USDA said that she had never farmed or owned a farm.  Friends of hers had to help her find her documentation of ownership, so that maybe now the USDA would grant her the compensation.  Her case is one of many blatant miscarriages of justice that this so-called Consent Decree has perpetrated on the Black farmers once again.

http://www.npr.org/templates/story/story.php?storyId=5230129
A new book of photographs captures a portrait of America's black farmers as their numbers dwindle. Photographer John Ficara and NPR's Juan Williams, who wrote an essay for the book (below), talk about the black families who still work on American family farms, despite decades of tough times.
"The black farmer, working hard for his own, became the living symbol of the strong, independent black man," Williams writes. "Farming also allowed black families to move into other businesses, from funeral homes to preaching to construction, and thus served as the bedrock of all black wealth in America."

http://www.themilitant.com/1999/6314/6314_7.html
Farmers Meet Cuban Youth in Georgia (1999)
.... Among them was Rosa Lee Murphy, 85 years old and an anchor of the cooperative. She currently farms and works on quality control, setting standards for the cooperative. According to the farmers, her policies have led to new markets. She was also the cooperative's first truck driver. "Don't get old 'til you have to," said Murphy. "I've been working since I was nine. I don't feel bad about it at all."